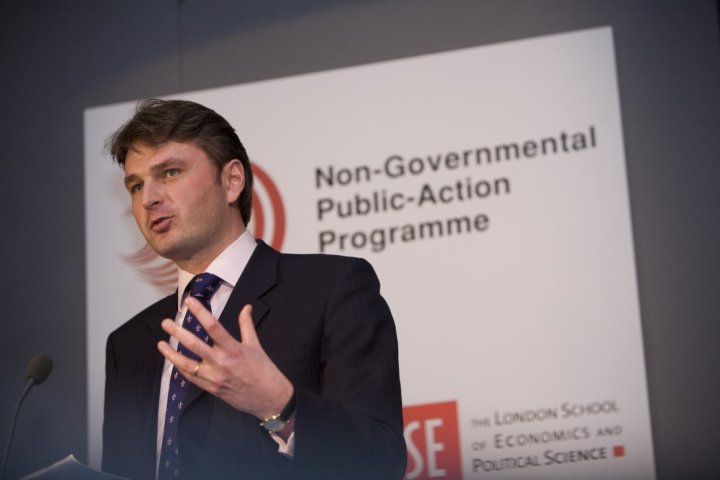 Daniel Kawczynski MP, a Polish-born Conservative politician, replied to the letter signed by 88 US senators calling Poland to pay for confiscated and destroyed Jewish WW2 property. On 5th August 2019, John Barrasso and other US senators called Secretary of State Michael R Pompeo to pressure Poland to pay back the Jewish property that was looted by the Germans after invading Poland in 1939. Kawczynski asked the US senators to join his campaign for Germany to pay the II World War reparations to Poland. According to the influential British politician, this could “right not one, but two wrongs” and properly compensate the victims of Holocaust as well as all the others who suffered under the German Nazi Machine.

The full letter can be read below:

I am contacting you in response to a letter to Secretary of State Michael R Pompeo dated the 5th August 2019 and signed by you and many of your colleagues. The subject of the letter is of particular interest to me as I am the first ever Polish born British Member of Parliament and Chairman of the All-Party Parliamentary Group for Poland.

I am pleased that you raised the issue of Polish suffering in World War II, as this is a topic that is often overlooked. By 1945 an estimated 3 million Polish Jews and 1.9 million non-Jewish Polish citizens had been murdered. In addition, in Warsaw 72 per cent of buildings, and 90 per cent of the cultural history, was destroyed. In 1939, 38 per cent of all Poland’s wealth was stolen and some estimates have put the total cost of damage done to be as high as $1 trillion. 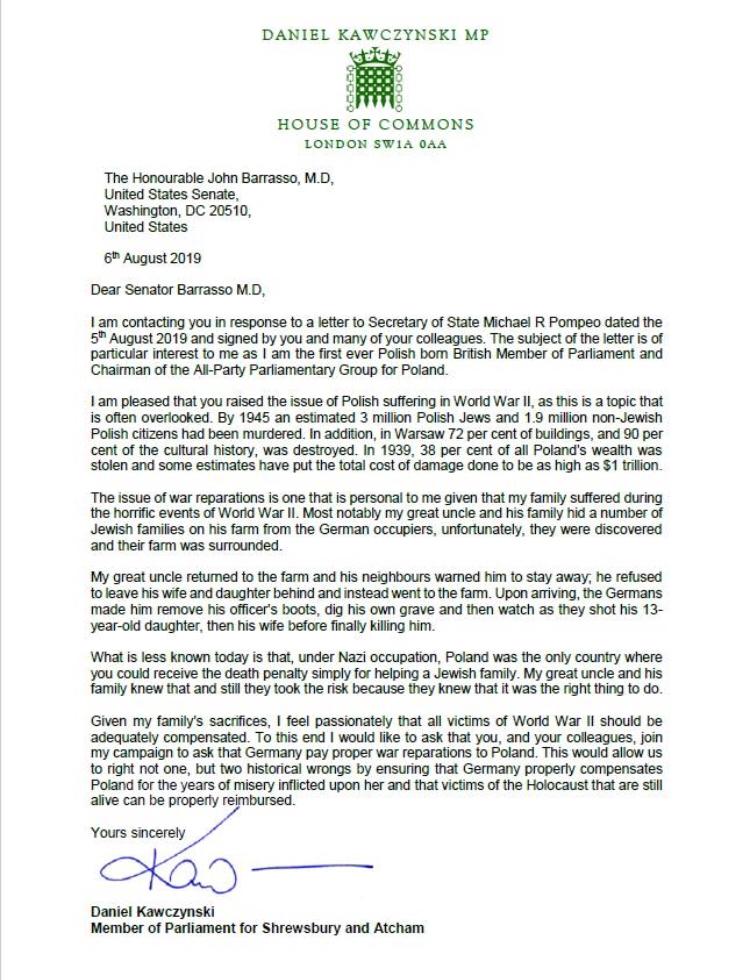 The issue of war reparations is one that is personal to me given that my family suffered during the horrific events of World War II. Most notably my great uncle and his family hid a number of Jewish families on his farm from the German occupiers, unfortunately, they were discovered and their farm was surrounded.

My great uncle returned to the farm and his neighbours warned him to stay away; he refused to leave his wife and daughter behind and instead went to the farm. Upon arriving, the Germans made him remove his officer’s boots, dig his own grave and then watch as they shot his 13-year-old daughter, then his wife before finally killing him.

What is less known today is that, under Nazi occupation, Poland was the only country where you could receive the death penalty simply for helping a Jewish family. My great uncle and his family knew that and still they took the risk because they knew that it was the right thing to do.

Given my family’s sacrifices, I feel passionately that all victims of World War II should be adequately compensated. To this end I would like to ask that you, and your colleagues, join my campaign to ask that Germany pay proper war reparations to Poland. This would allow us to right not one, but two historical wrongs by ensuring that Germany properly compensates Poland for the years of misery inflicted upon her and that victims of the Holocaust that are still alive can be properly reimbursed.

Member of Parliament for Shrewsbury and Atcham

Earlier this year Secretary Pompeo called on the Polish government to adopt a law allowing the restitution of property stolen and confiscated from Jews during the Second World War. Polish Prime Minister Mateusz Morawiecki replied in an interview with the Polish Press Agency (PAP) that Poland should not make amends for German crimes.

US President Donald Trump, amongst other world leaders, will visit Warsaw, capital of Poland, in September to commemorate the 80th anniversary of the Second World War’s outbreak.

The original article can be viewed at – https://www.britishpoles.uk/british-mp-calls-us-senators-to-urge-germany-not-poland-to-pay-ww2-reparations/