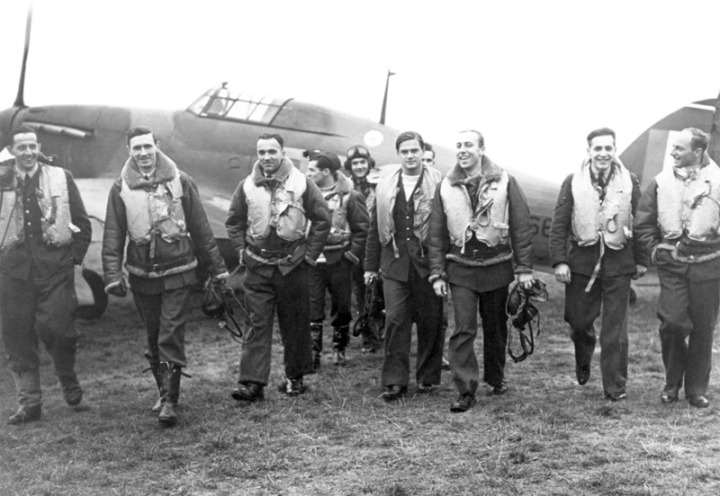 This autumn sees the 75th anniversary of the end of the Battle of Britain, and I believe that now is the time to give proper recognition to the Polish pilots who stood side-by-side their British comrades during Europe’s darkest hours.

At the time, Air Chief Marshal Sir Hugh Dowding, head of RAF Fighter Command during the Battle of Britain, admitted he was worried that the Polish pilots who had volunteered might do more harm than good, in view of the fact that they struggled with the English language and many were exhausted after their precarious journeys through enemy lines.

He very quickly realised that there was indeed no need for concern, as the courage and commitment shown by the pilots was second to none.

The pinnacle of the aerial conflict was in September 1940, when it was still uncertain who would dominate the skies over Britain. The involvement of the Polish pilots was like a godsend to the Royal Air Force, as an astonishing number of the downed German planes at the time were chalked up to the Poles.

“Had it not been for the magnificent Polish squadrons and their unsurpassed gallantry, I hesitate to say that the outcome of the battle would have been the same,” Sir Hugh magnanimously conceded and added that “dash and enthusiasm” of the Polish – the biggest foreign contingent to fight alongside the British – was “beyond praise.”

The legendary Polish 303 Squadron was considered the most successful unit of the Battle of Britain.

It is a great shame that we never managed to succeed in liberating Poland, the country whose initial invasion by Germany brought us into the war. However, after defeating Germany, the West was desperate to avoid a total war with Stalin that it failed to free Central and Eastern Europe from the yoke of Communist occupation.

A fact that is not commonly known, and has been portrayed by historian Jonathan Walker, is that our great national hero Winston Churchill secretly planned to rescue Poland after the war. That did not happen, as it was considered too risky.

It is not the way of the Polish to boast, but their courage and their sense of their historic achievements have always been under-stated. Still, the Polish people that I have spoken to lately – members of a community that is overwhelmingly hard working, decent and conscientious – have been saddened by the tone of certain media reports about them.

One may argue that our generation cannot compare itself to the brave British and Polish pilots who risked their lives for freedom. I would say that we, as their descendants, not only have a right, but also a duty, to remember our forefathers and to make sure that their sacrifices are today celebrated and paid tribute.

The Polish War Memorial, near RAF Northolt in South Ruislip, is one of the symbols to praise those people and the British-Polish brotherhood of arms.

Lord Tebbit is scarcely a European federalist, but it was he who said: “I am extremely glad that we had a wave of Polish immigration in 1940. We would have lost the Battle of Britain without them. We have those debts of honour to each other”.

As things stand, I am not aware of any event planned to specifically commemorate the contribution that the Polish made to the Battle of Britain, but I fervently hope that Britain should do the right thing for Poland.

According to a recent research conducted by Professor Christian Dustmann from UCL, Poles are the least likely of all the minorities in Britain to live off benefits, but some people would still accuse them of doing so.

It is vital to debate immigration, but we should always base our arguments on facts, not on prejudice and populist rhetoric. Poland is now not only becoming a key trading partner of Britain, it is also a fully paid up member of the NATO alliance, a natural ally of this country when it comes to fighting for peace and stability.

Earlier this summer, the Queen and the Duke of Edinburgh rightly paid their respects at the Polish Cross in the concentration camp in Bergen-Belsen.

In Grangemouth, Stirlingshire, a full size spitfire model in honour of those foreign pilots who lost their lives has been erected. It is a fitting tribute to those pilots who so magnificently helped to prevent the Luftwaffe winning the Battle of Britain.

In the words of the Canadian fighter ace Group Captain John A Kent: “We who were privileged to fly and fight with the Polish flyers will never forget, and Britain must never forget how much she owes to the loyalty, indomitable spirit and sacrifice of those fliers. They were our staunchest Allies in our darkest days; may they always be remembered as such.”

The article was first published on 4th August 2014 at Conservative Home.